Application of the instrument:

The basics of the functioning of the instrument:

Inhalation is a special method for the local treatment of respiratory illnesses. The advantages of the inhalational method are:

The obtainable physiological effects are:

Indications of the application:

For the cronic illnesses of respiratory tructs (asthma, bronchiale), and for different forms of allergic rhinitis

In case of long term application of the set the vital capacity intensifies and subjectively, it provides an improved general state of health

In our institute we tested the instrument on the following group of illnesses:

For the proper way of application the user must be trained and the process must be controlled, monitored later on. With the remission of the patien’s condition an individual dose must be defined with other expression: the duration of application must be determined.
The hypocamnia, caused by the forced – too hard – inhalation must be avoided so the aquirement of the proper technique is essential.

In order to avoid contamination, and in order to keep the instrument clean, only one patient should use one set. During the application of the instrument we did not change the dosage of the patients.

The voluntarily involved patients we randomly divided into the “treatment” and the “control” groups. The “treatment” patients used the instument several times a day for a determined period of time. Weekly and after two months we examined the patients – with attention to iron-, and vitalcapacity.

The application of the Saltpipe is effective even in case of cronic upper respiratory illnesses, but in these cases there was a need for medicinary supplementation also.

In case of the cronic illnesses, the patients reported about a subjectively easier breathing and inspirational experiences, which was officially confirmed by objective vitalcapacity measurements.

Based on the above mentioned statements, the outcome of the adjuvant application of the instrument has proven to be EFFECTIVE in many of the cases. During the test period no side effects have been observed.

I suggest the application of the “Saltpipe” instrument as a complementive, supportive method with the following completion: It must be distributed with a suitably informative and ethic description for users, which does not deceive the user and does not make him or her abandon the previously used traditional medicaments and treatment.

Notices about the experiences in connection with the Saltpipe used in the case of 10 patients:

10 patients were using the Saltpipe in the period starting in October 2002, finishing in February 2003, for 2-3 months of duration. These patients were suffering from respiratory illnesses; 3 of them suffered from cronic bronchitis, 7 of them from asthma bronchiales: 2 of this 7 people had severe bronchitis.

Out of these 10 patients 6 suffers from heart diseases, which aggrevated the applicability of antispasmiodic sprays – for the bronchial tubes – because of the side effects which exert the functioning of the heart.

I was trying to choose patients whose illness was severe (cronic bronchitis, and/or ashtma bronchiale).

The experiences of the patients show that the Saltpipe helps to dissolve sediments, helps in the process of discharge and doing so, easens their breathing.

As a doctor, I found the Saltpipe a very effective complementary tool in the therapy of patients with respiratory illnesses.

We can almost equalize the effects of the mineral-filled air inhaled through the Saltpipe with the effects of the salt caverns (apart from the fact that the temperature of air inhaled through the Saltpipe is identical with body temperature), further more, it is more moderate from a financial point of view than the expenses of salt cavern therapies. As a summery I would like to conclude the followings:

The secretion-discharge is easier and so, the breathing of the patient becomes more relieved. I also observed that the speed of the air-stream in the small bronchial tubes accelerated which results in an easier breathing.

I find the application of the Saltpipe indisputably beneficial. I owe you my gratitude – also in the name of my patients – for the Saltpipe. 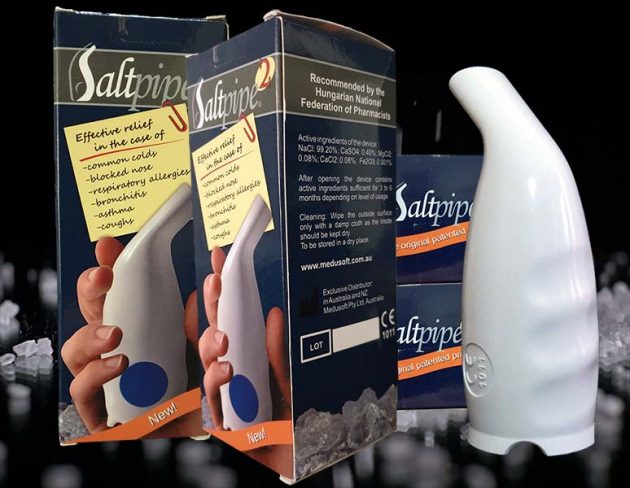 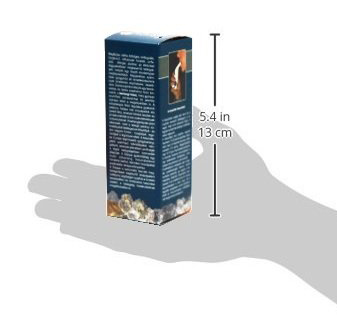 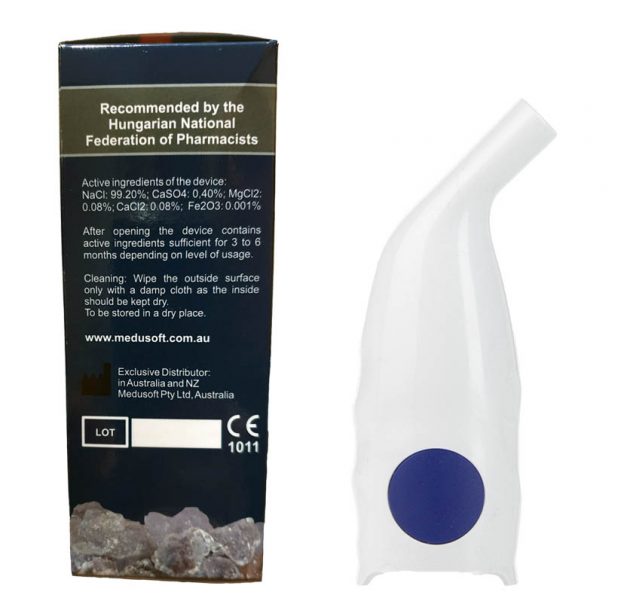 Our Saltpipe is a CE registered medical device.

Enjoy the benefits of rock salt vapours easily and simply in the comfort of your own home or on the road. After usage of the salt inhaler for about a week you will notice that your breathing becomes easier and deeper.

Same day dispatch if you order before 3PM (weekdays)

Be part of the family of multiple thousands of people who are breathing easier with the help of our patented Saltpipe:

Our patented Salt pipe inhaler is filled with Miocene Mineral Halite Salt Crystals from the Transylvanian Praid Salt mine. Its salty therapeutic microclimate calms and cleanses the cells of the respiratory system.

Tests have shown that the quantity of salt inhaled into the body per normal use of 20 minutes per day is less than a microgram and has no effect on blood pressure.

You can achieve the benefits of rock salt vapours easily and simply in the comfort of your own home or on the road by using the original, patented Salt pipe.

If you want to know more about our genuine dry salt inhaler, please read our Frequently Asked Questions section. If you still have questions, just simply send us an e-mail to contact@medusoft.com.au.

The product is catching the attention of both the children and the parents with its nice looks, especially with the latest elephant design, which does not give the impresson of a medicament.
The description should be attached in the form of a little brochure, the method of application should be described in a more detailed, pointed, highlighted way /introduction, “what to do-s”, and the importance of the daily, regular usage/.

Because of the relatively short testing period, we could draw only a few conclusions.

We received indisputably positive feedbacks from both of the patients suffering from recitive sinusitis. As a result of the application of the set, in the first 2-3 weeks the nasal discharge intensified, later the intensity of the mornig and evening coughings decreased.

In case of one of our two patients suffering from the illness of pseudo-croup, we did not experience any significant changes, the “barking-like” coughing did not emerge less frequently, its progress was similar to the previous way. There wasn’t much of a chance for the good outcome anyway, because of the conditions created by the possibility of virus infection. In the other case, the patient did not have coughing seizures in the testing period, but it might be a coincidence, because of the short period (again) we cannot give a “clear-cut”, certain explanation.

In case of our asthmatic patients (who were represented in a greater number) we would have also needed longer time for drawing more reliable conclusions. Since at wintertime the chance of infection is greater and the existance of allergens is not significant, these circumstances also influenced the effects of the instrument.

In two cases, the parents experienced that the relief from the asthmatic seizures come sooner and the torturing coughing ended faster.

In two cases the frequency of seizures decreased and it the last two cases we did not observe any significant changes.

I find the therapy – carried out by the Saltpipe – the most natural, physiological and the most effective of all. Very important – the simple fact – it is, that the air, inhaled through the saltpipe, creates much better conditions for the respiratory tructs and for the lung than the in-room or the outside air.

We can observe that the mood and comfort feeling of the people who use the saltpipe improved in a short term; their optimism and belief in their recovery appears.

These positive feelings – in case of both the adults and children – report about the activisation of those limbical-reticular centers inside the body, which are responsible for the intesifying of our adaptational skills.

This positive background is a very important factor of the Saltpipe’s healing effect. The wonderful therapic effects of salt caverns are well known to everybody.

The unique design of the clustered of one way valve systems (bottom and inside of the pipe) which allow the salted air come out only when is inhaled. Also it minimise the external humidity of entering into the cavity of the pipe and interfering with the salt.

The Salt pipe inhaler is filled with Miocene Mineral Halite Salt Crystals from the Transylvanian Praid Salt mine. Its salty therapeutic microclimate calms and cleanses the cells of the respiratory system.

We post to Australia, New Zealand and Canada only
Regular Parcel with tracking information
Buy more and save!

"I've been allergic to ragweed, mugwort and dust for 15 years. The asthmatic seizures occure from August to the end of October even with medicinal treatment. I have been permanently using Saltpipe even now. My sneezing, caused by my slight dust allergy is gone. I'm offering the Saltpipe for everyone who is allergic!"

If you would like to be a reseller (by buying 24+ Saltpipes) or would simply like more information about the Saltpipe product, please send us an email to reseller@medusoft.com.au with your enquiry and contact details and we will be in contact with you.

I want to be a reseller
